What people are saying

I bought the original (Dutch) version of this book when it was officially presented in a Brussels pub back in 2014. I even got it signed by the Author, something for which I am eternally grateful, as when the day comes I put it up for auction, Saudi princes will try to outbid each other to obtain my precious copy.

Because indeed: this isn’t just a book. In fact, this is the most significant contribution to literature ever since Anonymous penned down the Bible. The book is baptised « The Fixer », yet « The Messiah » would have been a more appropriate title, as its Lead Character wanders through the vast deserts of the EU political landscape, trying to find The Truth and Himself (The Author isn’t shying away from the idea that these two might be one and the same thing), whilst hoping to convert a few heretics along the way, being effective in doing so by consequently replacing water by wine.

And the book is about the EU: the most loathed Institution on the European Continent, though it’s not actually an Institution but rather a Political Platform, an Eternal « Vienna Congress » and that’s what the careful reader should notice, if (s)he wants to learn something. Because besides the numerous casual encounters with « Those In Charge » on formal but very much also less formal occasions, one should notice that everything politically really relevant happens outside « The Institution », in what are called « Informal Council meetings » and similar working groups of all sorts, spiced up with the unavoidable connected social events.

It is here that Wytze found His Calling and managed to call the shots for over a decade, until unfortunate events forced him to scale down a bit.

Written with wit, the book offers a humoristic insight in the Brussels Machinery; bringing everything down to the human scale. It doesn’t pretend to give a deep technical analysis of proceedings and « do and don’ts’ », as most books on topic do. Neither did the book come launched with a big campaign of just another supposed long-term insider « who will spill all the beans ». Yet, it contains far more insight than those serious books which pretend to do so, and already just for that reason it is highly recommended.

For those who haven’t bought/read ‘The Fixer’ yet, please read the review by former BBC Anchorman, Deutsche Welle and Bloomberg TV Host, Award-Winning TV Interviewer and bestselling novelist Tim Sebastian:

« Adviser, spokesman, bodyguard, bulldozer!
Wytze Russchen dissects the good, the bad and the incredibly strange characters at the heart of the EU’s most powerful institutions.
Raw, funny, intensely personal, opinionated and always politically incorrect.
Russchen is an immensely colourful character in a sea of grey suits, stripping away the rhetoric and exposing reality.
Don’t do business in Brussels without reading this first. » 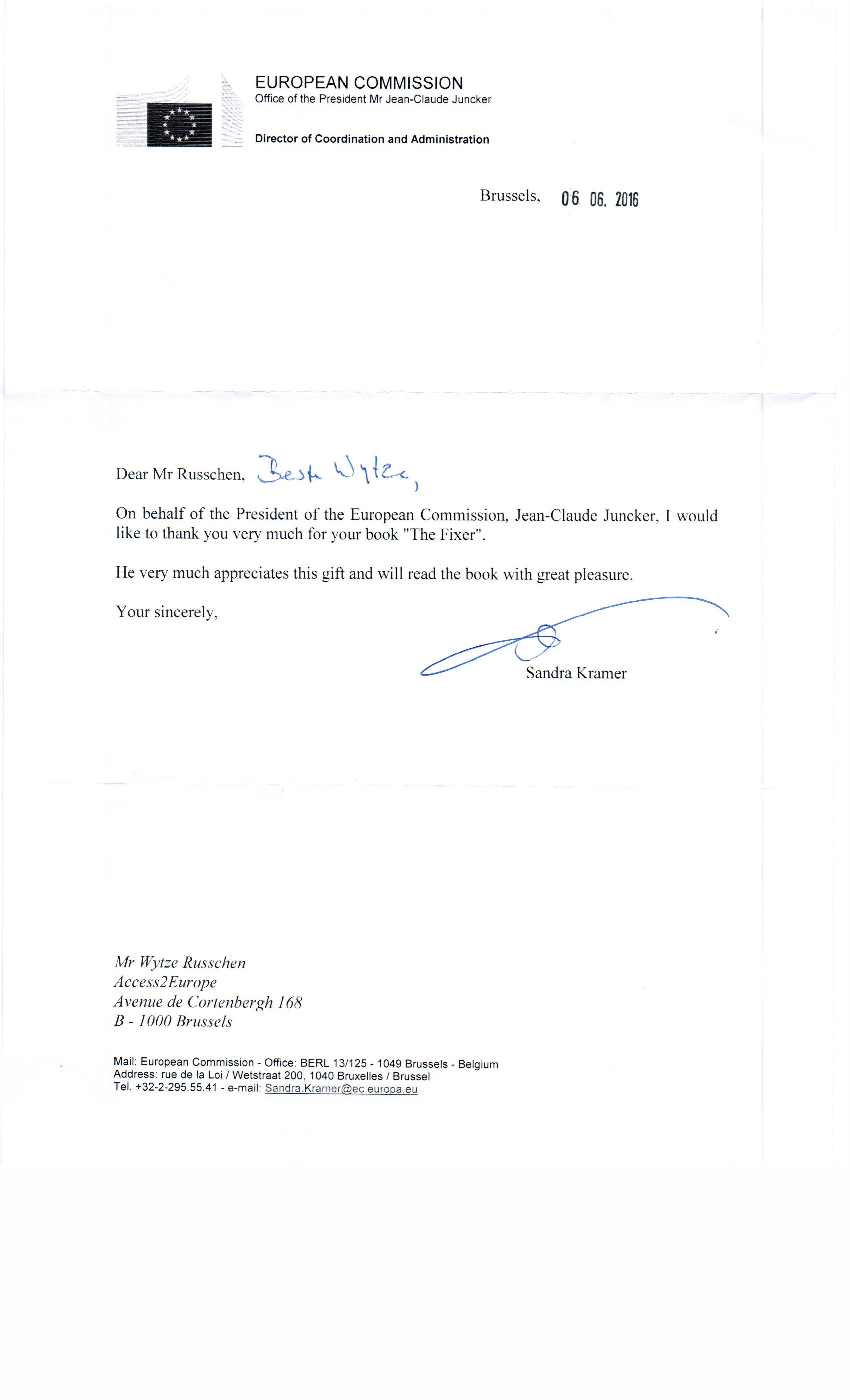 ‘The Fixer’– the English translation of « Het Oliemannetje »

‘The Fixer’ – the English translation of « Het Oliemannetje » makes Wytze’s adventures available for an international audience. It contains stories on the ‘big names’ Wytze has met and offers the reader a peek behind the European scenes. ‘The Fixer’ are the ‘mémoires’ of a Frisian boy who climbs his way up in lobby ‘wonderland’. Faced with headwinds, Wytze manages to bounce back and to get things fixed. ‘The Fixer’ is about resilience and loving people, written in an